Jules and Steve made the long drive down from New York to spend Martin Luther King weekend with us. We have been looking forward to their visit and almost everything we’ve done so far has been examined through the lens of “should we bring our friends to see this?” They arrived Friday night and we went out for some Carolina Barbecue. We drove across most of the island but once the sun goes down Hilton Head gets very dark, and with most everything set back from the road and surrounded by trees there’s nothing really to see.

It wasn’t until Saturday that they got to actually take a look at where they were, and we took a tour of the favorite outdoor spots we’ve found so far. The Audubon Preserve was much quieter than the last time we were there, maybe it was the time of day or the cooler and overcast weather. The four of us were a little disappointed we didn’t get to see more wildlife but were still in good spirits as we made our way to Jarvis Creek Park. In an hour walking around the lake we spotted ibis, egret, heron, and counted seven alligators, mostly thanks to Steve’s gator-spotting skills. A trip across the bridge to Pinckney Island brought the alligator total to nine and added to the number of birds I can’t identify.

We came to Mitchelville Freedom Park to close out the day. Looking at the massive live oak that dominates the entrance filled me with a sense of wonder at all that it has witnessed, in this place where escaped slaves built a community for themselves as war raged around them. We sat on the Toni Morrison bench between its palm trees and contemplated her words inscribed on the plaque: “There is no place you or I can go, to think about or not think about, to summon the presences of, or recollect the absences of slaves . . . There is no suitable memorial, or plaque, or wreath, or wall, or park, or skyscraper lobby. There’s no 300-foot tower, there’s no small bench by the road.”

A hike to the beach following a trail that took us deep into the marsh where the footprints of large seabirds in the mud looked like dinosaur tracks, and then we made our way to the house for home cooked ziti, local beer and some games.

We drove down to Savannah on Sunday and took the bus tour round the city, but it was too cold and windy to be comfortable walking around the city. We found a Dungeon and Dragons themed gamer pub named the Chromatic Dragon, where we ate lunch and played trivial pursuit. We cut our visit to Savannah short and headed back to watch movies warm on a couch. We had a great weekend discussing food, travel, life, the benefits and drawbacks of starting a cult in the twenty-first century, current events, culture, which one of us is best suited to be a cult leader, and generally just having a good time. It may sound funny at first to invite people to come on your honeymoon, but Kate and I have half a year of traveling ahead of us if we’re lucky, and there are few things I’ve found that aren’t made better by being shared with good friends. And Jules and Steve are some of the best. 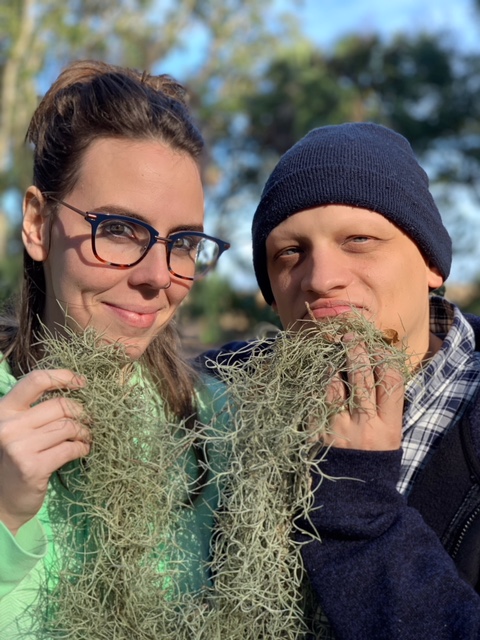