We awoke with a mouth full of dust, ready to take on another day of fun at Capitol Reef. Although the sand is so fine that it sweeps through the tent covering everything in a fine pink layer, you can’t beat the view of this free BLM campsite.

Because of Capitol Reef’s orchard history, they ship in small homemade pies to sell to visitors at the historic Gifford House from 8am-4pm. A local woman also makes cinnamon rolls, which are usually bought up by 9am. We got to Gifford House when they opened and procured a roll for sustenance before heading to Hickman Bridge, the most popular hike at Capitol Reef. 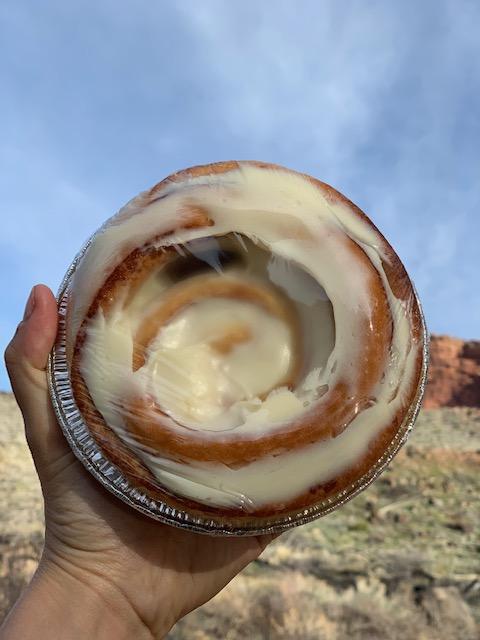 Ah, before we go any further, here is a picture of those lava rocks Ryan mentioned in our last post. Made of basalt and forged by fire, these guys tumbled to Capitol Reef from a volcanic eruption west of the the park by hitching a ride on a glacier. We spotted quite a few on our way to Hickman Bridge.

At just 1.7 miles round trip, Hickman Bridge is the most popular trail in the park. It’s easy to see why: big payoff with little effort. We found the bridge and headed beneath it just as the water that formed it once had.

On our way back down to the trailhead we enjoyed views of Pectorals Pyramid. Strange formations pop up all over the park- alien structures dotting our terrestrial landscape.

After the bridge, we took a little stroll to see some petroglyphs from the Hisatsinom (also known as the “Fremont culture”), carved between 300 and 1300 C.E. Some of the petroglyphs were destroyed by rockfall in 1952, but we were able to see a few panels. Though not nearly as old as some of the petroglyphs we have seen on this trip, they still seemed to transport me to a time and place where nothing but true wild ruled the park. 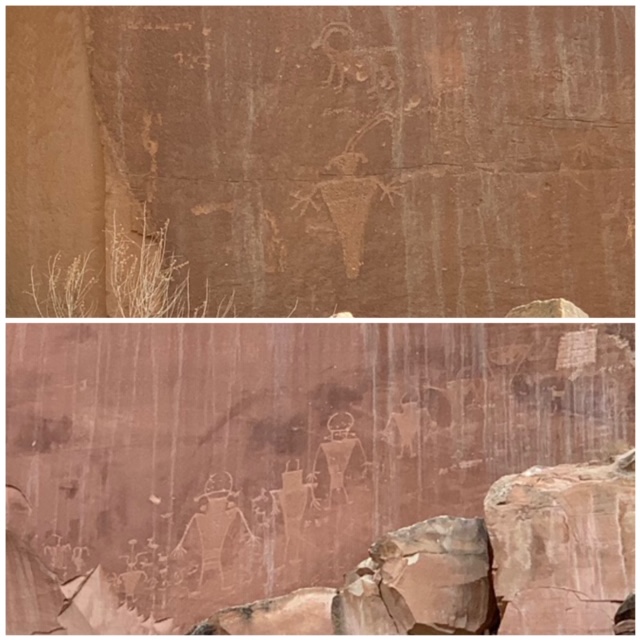 After a little afternoon siesta, we decided to hit the Cassidy Arch, a 3.5 mile out-and-back, named after Butch Cassidy who (rumor has it) hid out in the park. Maybe he used to hide out in one of these natural caves. Seems like a good enough place to wait out the law. 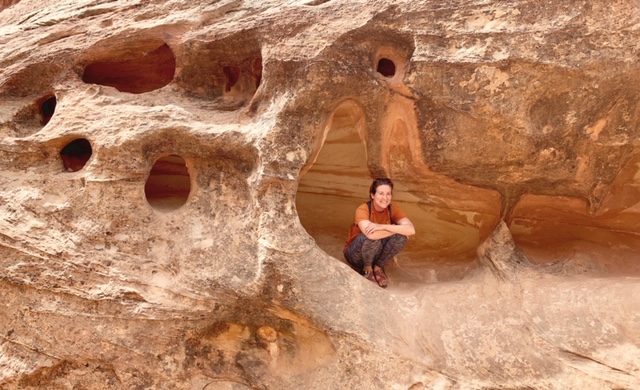 We began climbing, anticipating our walk across the arch (Ranger recommended).

We stopped to take photos of Fern’s Nipple. I don’t know who Fern is, but I feel for her. 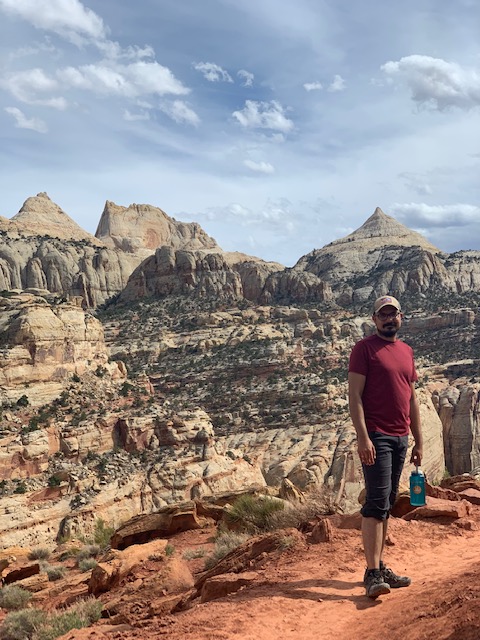 After arriving at Cassidy Arch, we walked across it one-by-one so that we could take photos of each other. Talking to Ryan over this giant hole to nowhere was the first time on the trip that my stomach flipped. I had that “I shouldn’t be here / must find exit” feeling.

Ryan had the opposite experience and felt peaceful and connected, sitting 500 feet above nothing. Either way, we both agreed it was our favorite hike of Capitol Reef. Maybe fear and zen are two sides of the same coin.

We headed back to our sand dune/tent, anticipating the dust that would envelop our bodies one last night. Unfortunately, we didn’t know just how sandy Arches National Park is. We have never been more exfoliated in our lives.