We packed up our snow covered tent and crossed into Arizona. After a night in Tucson, we hit Saguaro National Park. It’s pronounced suh-WAH-ro, which I’m still working on myself.

After weeks exploring all over the Chihuahua you’d think we’d be done being surprised by the desert, but here we were entering the Sonoran Desert and we found it full of new things to discover. The park is named for its foremost resident: the saguaro cactus. Ah, finally, here was that iconic shape I have been taught to expect. But no one ever told me they were this tall!

This park wins best educational video, mostly because at the end the screen raises into the ceiling and the curtains open up to let the sun stream into the dark theater, showing you the desert landscape you want to go explore now that you know a thing or two. We learned that saguaro can grow up to 50 feet tall and reach 200 years old, waiting 35-70 years to sprout their first arms depending on how much water is available. We took a moderate hike in King’s Canyon and were quickly in the midst of a saguaro forest. It felt like walking on another planet, and we felt lucky to be there. 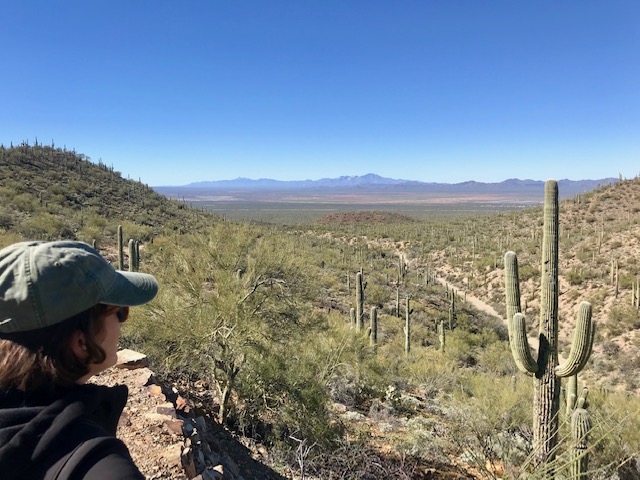 We found some baby saguaro, which apparently need “nurse plants” to shade them for the first few years of their growth. Often these small trees and bushes are choked out by the expanding roots of the maturing cactus (maybe parents can relate) as the saguaro’s shallow roots extend as wide as it is tall to collect precious water. We also found the woody ribs of a few dead ones. The Native Americans from this area, the Tohono O’odham, use this wood to fashion a tool for harvesting saguaro fruit from the top of these towering, spine covered plants. 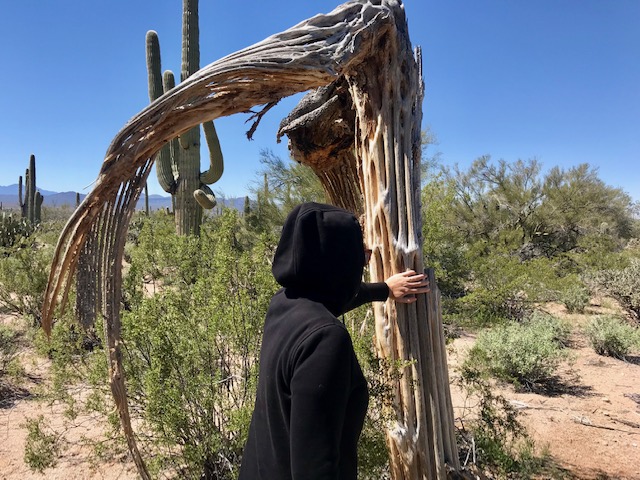 The Tohono O’odham say that the saguaro are people, and walking among them you can feel it. We couldn’t help but talk to the cacti, and ascribe human qualities to them. For the most part we had the trail to ourselves, but it felt like we were walking through a party. At one point we did meet an actual human person, a parks volunteer who taught us some of the birds we were hearing (cactus wren, curved-bill thrasher, and mostly pyrrhuloxia, the cardinal’s hard rock cousin,) and chatted with us about New York City. Down the line we spotted a Gila woodpecker hammering on cacti, a family of gambles quail, and a hummingbird, whose tiny high pitched cry was just on the edge of our hearing.

Despite our best efforts there were no spots available for us to camp; snowbird Boomers in RVs were everywhere. I came to a realization: Arizona is the Florida of the Midwest. (The more time I spend in the state the mod it proves out.) Undeterred, we drove to our next stop, Organ Pipe Cactus National Monument, where we got one of the last tent spots in time for sunset. It was a beautiful location, with the lights of Sonoyta, Mexico down below us, the desert all around us, and a cactus friend beside us. What a life.

One thought on “Saguaro”